Do You Really Want Justice?

Would you agree that if the accuser brings a false report of wrongdoing that the one bringing the false report should receive the punishment he wanted imposed upon the falsely accused?

After spending the majority of his life behind prison walls, the job search was understandably difficult “Filling out job applications meant accounting for the 38-year gap in his employment history. And while Clay’s conviction was overturned by a judge, an employer checking for a criminal background would still see his arrest for murder.” (1)

Using the opening question should the one who wrongfully spent 38 years in prison be replaced by the one who falsely accused him?

It might happen at least in one case where a grand jury indicted a former Louisville detective who worked on the cases of at least three innocent men who were wrongly convicted. (2)

Where does a falsely accused person go to get his good name back?

In cases where people are convicted in the court of public opinion without due process, where do they get their good name back?  Where do they work unmolested to support their family?

The ideas of justice and righteousness are deeply connected in the Bible. Both are richly applied to many things, from fair weights and measures, to just legal proceedings, to good personal conduct, to honesty and truthfulness, to an individual’s right or just claim, to employers’ economically just behaviors, to judges’ fair decisions, to the governmental responsibilities of kings and rulers.

The clear meaning of “justice” is “what is right”, the way things are supposed to be. The fairness of laws coupled with fair and equal treatment under the law is common biblical concerns. Justice can also mean “deliverance,” “victory,” “vindication,” or “prosperity” — but for all, not just a few. Justice is part of God’s purpose in redemption.

Unfortunately many today have taken up violence as their first response where civil public discourse used to be common place.

Those causing the violence are intent on instilling fear, just like any bully. Unfortunately this violence could cause serious injuries both physically and to ones mental health.

There is certainly nothing wrong with expressing your disagreement, it is the manner and form of your expression which may become disagreeable.

In times in the not too distant passed it was common to sit around a table to share and discuss differing views and resolving problems. We could get there again, starting today one person at a time.

If we could get back to have to having civil public discourse we would have a lot less people being falsely accused, a lot less fear and anxiety as well .

16  If a false witness rises against any man to testify against him of wrongdoing,
17  then both men in the controversy shall stand before the LORD, before the priests and the judges who serve in those days.
18  And the judges shall make careful inquiry, and indeed, if the witness is a false witness, who has testified falsely against his brother,
19  then you shall do to him as he thought to have done to his brother; so you shall put away the evil from among you.
20  And those who remain shall hear and fear, and hereafter they shall not again commit such evil among you. 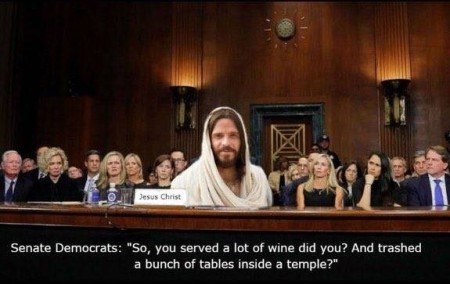 Just awful: "High school clique of five 'mean girls' are sued for targeting a boy with false sexual assault allegations because they 'just don't like him’” https://t.co/1G6h6QL3Lp

.@WhoopiGoldberg, instead of insinuating that my sons are potential future abusers, you might want to explain why you defended actual child rapist Roman Polanski?

“I don’t believe it was ‘rape’ rape.” – Whoopi Goldberg on Roman Polanski

BREAKING: This is quite a read. Woman who claimed Justice Kavanaugh raped her now admits they’ve never even met. She’s been referred to DOJ/FBI for investigation and could soon be in serious legal trouble. https://t.co/QhFXt9yhRn