VIDEO Romans 13, Obey No Matter What?

Resistance to Tyrants is Obedience to God 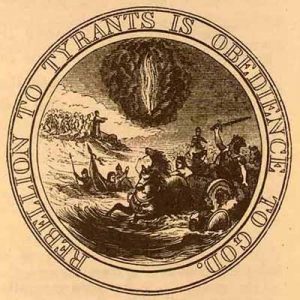 n the story of America’s Great Seal, a particularly relevant chapter is the imagery suggested by Benjamin Franklin in August 1776. He chose the dramatic historical scene described in Exodus, where people confronted a tyrant in order to gain their freedom.

Franklin’s design was recommended by the first committee for the reverse side of the Great Seal. No sketch was made of their design. The above drawing was made by Benson J. Lossing for Harper’s New Monthly Magazine in July 1856. Note: Lossing failed to include something Franklin specified: “Rays from a Pillar of Fire in the Clouds reaching to Moses.”

Thomas Jefferson liked the motto “Rebellion to Tyrants is Obedience to God” so much, he used it on his personal seal. Also, it seems to have inspired the upper motto on the final reverse side of the Great Seal: Annuit Coeptis (God has favored our undertakings).

The Bible is the Foundation of the Constitution

Jenna Ellis The U S Constitution and the Bible

8 Responses to VIDEO Romans 13, Obey No Matter What?